A Vortex of Creativity 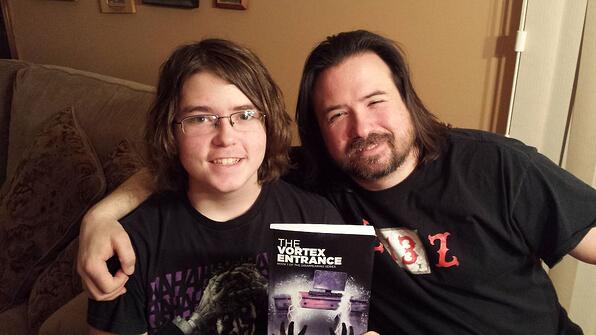 At Pipitone Group, we have a very creative and talented team, and we love supporting creative endeavors both inside and outside the office. Gregg Horvat, Interactive Developer at Pipitone Group, has a very special endeavor to support. Gregg’s 15-year-old son, Jackson Horvat recently published his first novel.

Jackson’s novel, The Vortex Entrance, is the first of a six-book series being published by Inknbeans Press. Now a high school student, Jackson wrote the majority of the first novel when he was in the seventh grade and has now written most of the second book in this young adult, fantasy/sci-fi series.

“I’ve always liked to create stories,” Jackson says. “Being a published author is the most incredible thing. It’s my dream coming true!”

Gregg got the privilege of designing the cover for his son’s book, and no matter what happens, Gregg is extremely proud of his son.

“You always want to see your children’s dreams come true, but you never expect it to happen before they have a driver’s license,” he says. “Whether Jack’s book sells 100 copies or 1,000,000, he’ll always have this accomplishment, and it will look great on a college application.”

The Vortex Entrance is available from Amazon and Barnes and Noble.

You can also watch a news story from WYTV or visit Jackson’s website to learn more.