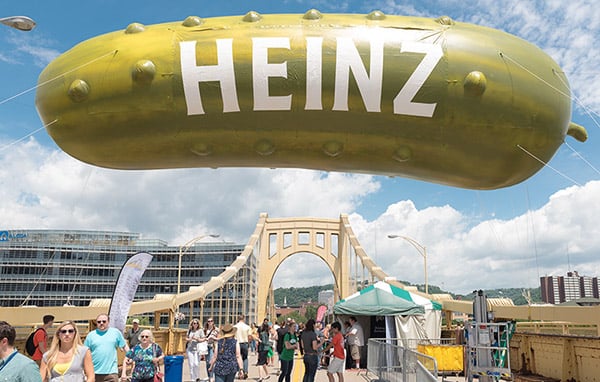 A Pretty Big Dill for the Agency on Observatory Hill

Pipitone Group (PG) found itself in a bit of a pickle this week and many weeks prior, as it helped its client, Kraft Heinz, launch its first new pickle flavors in more than half a century. A fully integrated effort showcased all of the PG's varieties including graphic design, media relations, digital marketing and marketing technologies.

How We Built a Study that Held Water


A small but mighty collection of Pipitone Group staffers and their families braved threatening skies and chilly temps to participate in the 5K Highmark Walk for a Healthy Community on Saturday, May 17.  All proceeds from PG’s fundraising efforts went to benefit the recreation fund at Presbyterian SeniorCare, one of PG’s B2C accounts.

Don Hewitt, the revered news man and creator of “60 Minutes”, managed some of the best and brightest journalistic minds of our time. Some might say he managed some pretty massive egos, too, with the likes Mike Wallace, Harry Reasoner and Ed Bradley. Despite the tremendous talent that reported to him, however, his simple direction remained constant for more than 40 years: “Tell me a story.” In fact, his book is aptly titled, “Tell Me a Story: Fifty Years and 60 Minutes in Television.” Few could argue that the reason “60 Minutes” is now in its 45th year is because its correspondents stick to that simple four-word creed.

In practicing media relations for 15 years, I’m still fascinated by the elements of what makes a great news story. As a PR guy, however, I still find myself struggling to explain to clients that in order for their media relations strategy to work and for their product or service to become news, they need to go back to Mr. Hewitt’s advice, or for that matter, the words my four-year-old daughter says every night when I’m tucking her in – “Tell me a story.”